Living with HIV and haemophilia

This is a piece I wrote for my training newsaper, the Cardiff Evening News.

Like any new grandparent, Haydn Lewis was thrilled to welcome his first grandchild into his Cardiff home. But as the carpenter from Penylan played with his week-old grandson, it did not escape him this was a moment he thought he would never live to see. “I am 52 and I have Hepatitis B, Hepatitis C, HIV and I have been diagnosed with liver cancer as a result of the Hepatitis C,” said Mr Lewis. “I would drive myself mad if I thought about it all the time.”

For the last 23 years, Mr Lewis has been one of 1,246 members of the haemophiliac community infected with the HIV virus, and one of more than 5,000 haemophiliacs who contracted Hepatitis C, as a result of contaminated blood imported from the USA in the early 1980s. Haemophilia is a hereditary condition that means an individual’s blood does not clot properly. But American blood used to treat the condition between 1979 and 1985 was taken from paid donors with a high risk of HIV and Hepatitis C infection, such as drugs users and prisoners, and the imported blood found its way into NHS treatments for haemophiliacs.

Panic surrounding Aids and HIV in the early eighties was at its height, and both governments and the public knew little about the virus. But the Government has since refused to hold a public inquiry into the mistakes that led to the tragedy, and for many years documents relating to the scandal were reported missing. These documents were found in 2006, and on Monday Lord Archer of Sandwell will present findings from an independent inquiry that many hope will provide a clearer picture of what happened more than two decades ago.

The impact on the lives of those affected has been devastating. Of more than 1,200 people infected with HIV, less than 350 are left. Three-quarters of those who contracted Hepatitis C have died. And these numbers do not consider “infected intimates”- the spouses of haemophiliacs who were infected before their partners were diagnosed.

In Cardiff, the issue has particular resonance. One of the earliest cases of haemophiliac HIV infection was identified in the city as early as 1983, and the Heath Hospital’s haemophilia unit was the home of Professor Arthur Bloom, a leading figure in haemophilia treatment, who the unit is now named after.

Mr Lewis (pictured, age 50), whose mother was a carrier of the haemophilia gene and older brother Gareth is also a HIV haemophiliac, suspects he was unknowingly treated with contaminated blood from 1979 but was not diagnosed with HIV until 1985. By this time he had already married his wife, Gaynor, 52, and they had two sons. Gaynor, who has been married to Haydn for 33 years, unwittingly contracted HIV from her husband.

“It has had an absolutely profound, fundamental affect on my life,” Mr Lewis said. “I had to give up my job and have not worked for 15 years. I am constantly juggling my health and my wife’s.
“Just think what my two boys have had to grow up with, with both of their parents’ lives in the balance.”

Neither of Mr Lewis’s sons, now aged 32 and 30, were infected, but their father suffered another blow in September last year when he was diagnosed with liver cancer – a direct result of his Hepatitis C infection. He is on the transplant waiting list, but without a new liver his life expectancy will be reduced to a matter of months.

In to 2009, the campaign for a voice for this often forgotten group is also being led from the Welsh capital. Frustrated by the lack of Government cooperation, Mr Lewis approached MP for Cardiff Central, Jenny Willott, three years ago.
“When Haydn first came to me it all sounded like a conspiracy theory,” said the Liberal Democrat MP. "But the more I dug, the more suspicions it raised. It seems to me that with 5,000 people infected by NHS treatment, I think it should be automatic that there is an inquiry into what happened.”

She said despite numerous parliamentary questions and freedom of information requests to the Department of Health, responses were rarely received and no one from the department was officially represented at the Archer inquiry. The Department of Health could not be reached for comment for this article.

There is support available. TaintedBlood is a campaign group set up by victims, with Mr Lewis as a founding member. And in 1988 the government founded the Macfarlane Trust to provide financial support and guidance for those affected, giving out around £3.4 million in aid to patients each year. Chief executive, Martin Harvey, said: “We might help someone with a small business start up or a new washing machine – anything to make the difference.” But victims have never received any compensation, aside from ex gratia settlements the Government paid out in 1991 under the condition victims did not try to sue for future infections.

When Lord Archer (the inquiry is pictured here) publishes his report next week, many would like it to provide answers for those pati 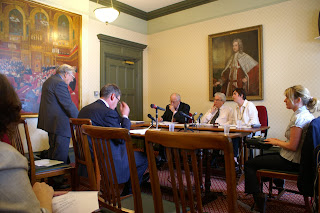 ents still alive and for the many affected partners, widows and children. Although all blood products have been tested since 1985, revelations earlier this week a haemophiliac who died recently carryied the CJD virus (the human form of mad cow disease), has put 4,000 haemophiliacs on yet another “at risk” register and suggest there are still lessons to be learned.

Mr Lewis said: “I am angrier now about the way the Government has dealt with this than I am about being infected. It is absolutely shameful. I am a human being and I deserve respect. All I have had is contempt.” But despite everything, he remains upbeat. “Seeing my new grandson has given me the biggest boost and zest for life, more than any chemical combination,” he said. “You just get on with it, with a smile of your face and a constructive attitude to each day.”
Posted by Jessica Best at 13:47

1 in 4 sexually active teenagers become infected with an STD every year, in the United States alone. Now, more than ever, we need to join together to fight this growing issue. As I read through your website, it is clear that you share the same passion for STD/STI awareness. We here, at Disease.com, understand the importance of STD/STI prevention and treatments. If you could, please list us as a resource or host our social book mark button, it would be much appreciated. We can not reach every teenager, but together we can try.
If you need more information please mail me with the subject line as your URL.

Jessica Best
Cardiff, United Kingdom
I'm using this blog to navigate my way through the murky world of online journalism whilst studying for a postgraduate degree in newspaper journalism at Cardiff University. I'm new to all this, so bare with me...